The History of the LaCie Rugged: Creative Pros’ Most Beloved Mobile Hard Drive

The History of the LaCie Rugged: Creative Pros’ Most Beloved Mobile Hard Drive

LaCie is celebrating our 30th birthday this year… congratulations to us!

As part of the #LaCieTurns30 celebration, we wanted to share a little history about our most iconic product family — the LaCie Rugged.

A brief history of the LaCie Rugged

Since 2005, LaCie Rugged portable hard drives have thrived where only the toughest survive — the film sets, photo shoots, and music studios of the world’s most influential creative pros. Why? Because LaCie Rugged products are the industry’s most trusted way to capture and transport data in the field.

Compact, sturdy, and ready for anything, they’re the ideal solution for transporting data on set, in the studio, and into the hands of clients. From IP67-rated extreme water resistance to drop, rain, dust, and crush resistance — it’s durability like this that keeps photographers and filmmakers coming back for Rugged drives.

How has Rugged evolved since it was first conceived? Let’s take a look back at the award-winning history of LaCie Rugged hard drives.

The Rugged drive — a sturdy steel box wrapped in a protective orange rubber sleeve — stood out immediately when it debuted, and quickly became a favorite for creative professionals who needed fast, high-capacity portable storage that could withstand the rigors of the road.

“The Rugged was an instant classic,” says the Paris-based designer Neil Poulton, who’s envisioned and developed the look of many LaCie external storage products including Rugged. “But where we’re going now is more interesting than where we’ve been.”

Poulton has described a painstaking process behind the drive’s original design — it included countless revisions, and overcoming early challenges with durability testing. “We did about a million hardness tests and still couldn’t get the Shore value (hardness rating) of the bumper right,” he says.

Eventually, the drive passed those tests, of course. Today Rugged is sturdier than ever, capable of surviving drops from higher heights than ever and being run over by a 1-ton car — and in some models even a 2-ton car!

Durability like this is the core reason creative storytellers choose Rugged shuttle drives.

Poulton has noted that his inspirations for the product’s original design included the “Spectrum Pursuit Vehicle,” a tank-like vehicle featured in the 1960s British sci-fi TV show Captain Scarlet and the Mysterons. Check out that snappy space-age ride in this video:

You can see some of that influence, and some of Poulton’s other ideation, in his original conceptual sketches here:

And that bright orange color — unique and unmistakable! Have you ever wondered why Poulton chose orange for the drive’s rubber sleeve? Check out his reasons in last month’s blog here.

Design improvements, right from the start through today

In the years since the first Rugged, LaCie has improved and expanded on the Rugged family. For example we’ve boosted its capacity from a then-impressive 80GB with the first version all the way up to an 8TB (8,000GB) capacity today with the Rugged RAID Shuttle version — that’s a 9,900 percent capacity increase! LaCie’s also expanded the types of Ruggeds available to solve a wide variety of needs, producing everything from mini versions to larger high-capacity versions, SSD models and backup-on-set-solutions (BOSS).

We’ve kept boosting Rugged with new speed and productivity features over time, for example adding super-fast Thunderbolt connectivity in 2012, adding models that use two internal drives in RAID for twice the speed and capacity in 2015, incorporating the latest NVMe SSDs for incredible working speeds, and introducing breakout capabilities that let creatives working in-the-field back up their files directly from SD cards and USB devices, monitor file-transfer progress, capacity, and battery life right on the drive with a built-in status screen, and even work with the drive’s files directly from a smartphone.

Since its introduction, the Rugged drive has been used by adventure photographers like Andy Best and Zak Noyle, filmmakers like Cory Popp, videographers and YouTube stars like Sara Dietschy, music producers like Nashville’s Paul Moak, and TV shows such as Portlandia to store and ship footage from the field to the editing suite. The durable drive is equally at home in Hollywood production studios and the hot, dry, wet and icy extremes of every wild place.

Check out this list — a few fun history factoids about some of Rugged’s designs, inspirations, and more.

Fun factoids about the LaCie Rugged 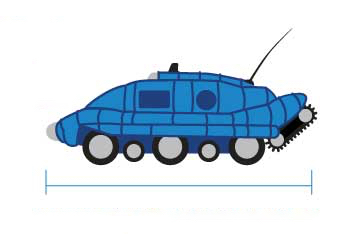 25
The length in feet of the “Spectrum Pursuit Vehicle,” the tank-like vehicle from the 1967 TV Show Captain Scarlet and the Mysterons that inspired Poulton’s design for the LaCie Rugged’s bumper.

6′ 7″
Height of the average professional basketball player. Also a height from which many Rugged models can fall without losing their data. (You can check your specific model’s drop resistance here.) Incidentally Poulton chose the color orange because he wanted the Rugged to be flexibly tough like a basketball.

0
Amount of doubt Poulton had that the Rugged would become an instant classic.

(Lost Count)
Number of design review rounds before LaCie’s then-CEO, in a rage, tore off the hinged rear cover of a Rugged prototype. With his teeth.

9,900
Percentage increase in capacity between the first Rugged and today’s highest-capacity Rugged (80GB vs 8TB).

18,181
Number of Rugged SSD Pro drives (at 0.22 lbs) that could be stacked on top of each other and the bottom drive would still be OK. 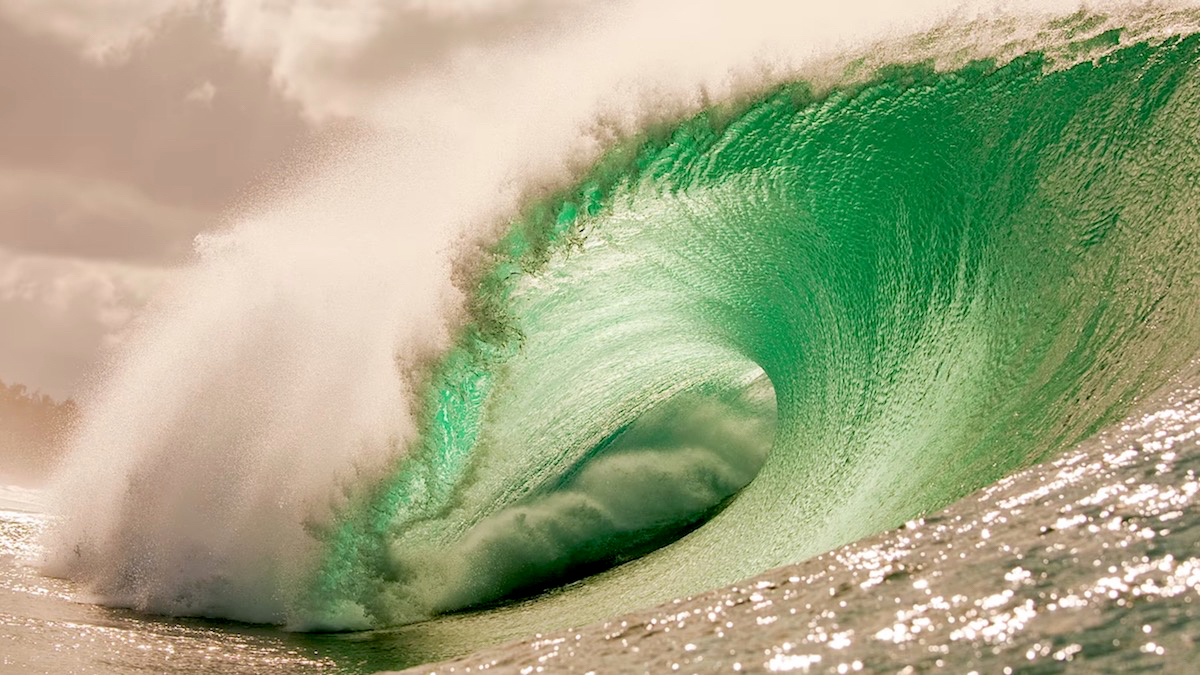 Tahiti
Surf photographer Zak Noyle backed up his jaw-dropping images during a photography trip to Tahiti.

Republic of Georgia
Pro photographer Jason Thompson brought the Rugged with him on a remote ski expedition into the Caucasus mountains.

Baja California
Rugged goes 1000 miles to help film the What is West series from National Geographic.

Antarctica
In the coldest, most brutal place in the world, Rugged helped photographer Seth Resnick capture “a time and place that cannot be repeated.”

Chernobyl, Ukraine
Photographer Edwin van Laar shot images at one of the most desolate places in the world, site of the infamous 1986 nuclear disaster. He managed a distance of 300 meters from the nuclear power plant for only ten minutes; staying longer is impossible because of the radiation risk.

2007
French national museum the Centre Pompidou in Paris placed LaCie’s Rugged and several other Poulton designs in its permanent collection. 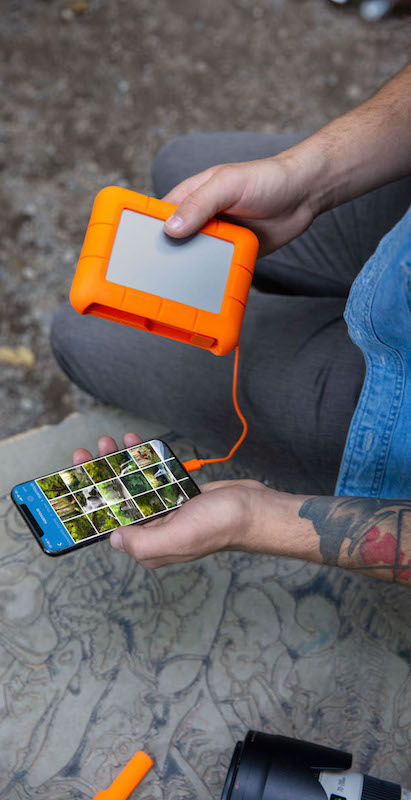 2009
Rugged XL released — Rugged gains a pound and a half by incorporating a 3.5-inch internal drive to achieve 1TB. Sounded like a good idea at the time.

2012
RuggedKey — Not for sale any more, but it was fun … not that you would, but you *could* drop it out of an airplane.

2012
Rugged Thunderbolt Series — It was the fastest mobile storage in the world for its time.

2015
Rugged RAID — Now this makes sense. At launch it was four times the capacity of Rugged XL, and only a third the size.

2016
Rugged adds USB-C technology for next-generation computers like Apple’s MacBook as well as the most advanced USB computers.

2019
LaCie Rugged RAID Shuttle — This is a first-of-its-kind 8TB portable RAID in a clever flat design, for transporting large projects safely and efficiently.

2019
Rugged BOSS SSD — With this Backup-On-Set-Solution (BOSS), now you can copy files directly to the drive with a built-in SD card reader and USB port. Monitor transfers, battery life, and capacity using a built-in status screen. View and manage files on smartphones and tablets.

Thanks for reading this far! Check out the website to find all the up-to-date info on the newest Ruggeds, like the 8TB LaCie Rugged RAID Shuttleand these new Rugged SSD drives!