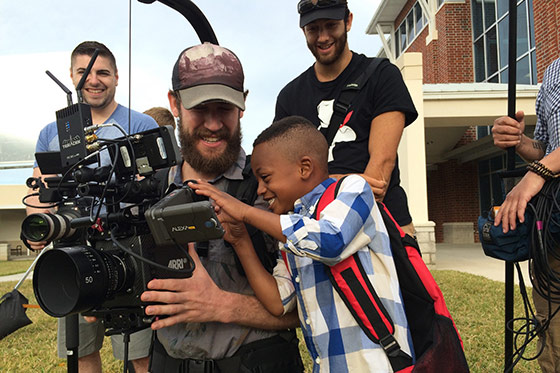 First thing first, what’s the story with that name? According to Dan Riordan, a partner at Gnarly Bay, the Rhode Island-based video production company is actually named for a mythical body of water near their hometown.

“The story goes that in this small bay, there are tiny-but-perfect waves that never really form into anything big enough to ride,” Riordan said. “But, the thought is that someday a storm will come and Gnarly Bay will break, big and perfect.”

It was a hopeful beginning for a hometown company. And nine years later, Gnarly Bay Productions has gone from a passion to a thriving, dynamic business.

From Humble Beginnings
Gnarly Bay grew out of the work that Riordan was already doing with his friend and business partner, Dana Saint, when they were fresh out of college. At the time, this consisted of short, paid gigs—wedding videos and the like. Their big break came when a local radio station held a contest: $15 thousand to the team that could put together the best 15 second commercial for the station. It was the first major infusion of capital for the company.

But that was just the beginning for Gnarly Bay. Today, the company has five full-time employees, with a resume of work that includes projects for Verizon, Starbucks, and the NFL, as well as a number of other major brands. This growth can be attributed, in part, to the company’s effective use of distribution platforms like Vimeo. The company’s videos have regularly been named as Vimeo Staff Picks, and their video “a story for tomorrow,” was even named a finalist at the Vimeo Awards a few years back.

Gnarly Bay has also embraced new technologies since their 2007 launch, taking advantage of new cameras and video formats—from digital SLR all the way to 4K.

“We jumped in headfirst on 4K this past year,” Riordan said. “And we were absolutely shocked that we could only fit 28 minutes of footage on a 256GB card.”

Keeping up with Technology
Faced with an unanticipated storage challenge, the company tried to do as they’d always done. But this time, it wasn’t enough.

“We started buying up desktop external drives with their own power supplies,” Riordan said. “Toward the end, we were buying 4TB drives, just to get a decent amount of footage on them. At some point, it became apparent that this wasn’t going to be the best solution.”

Riordan asked around, and friends pointed him to the LaCie 8big Rack Thunderbolt 2—something he says “got us into the big leagues.” Today, Gnarly Bay uses three 8big units, housing 48TB worth of storage, supported by a 30TB 5big Thunderbolt 2 and a number of 1 to 4TB LaCie Quadra drives. Of top importance to Gnarly Bay is reliability, and with the RAID protection offered with the LaCie 8big and 5big units, the risk of data loss from drive failure has been greatly reduced. This explains why Gnarly Bay has stuck with LaCie products almost exclusively since they suffered a few hard drive failures from other manufacturers.

According to Riordan, moving to the LaCie 8big was the biggest improvement to their workflow, because it provided an easy way to search through files. In the past, searching for a file would mean finding the actual drive on a shelf and searching for the correct file. To date, they’ve consolidated more than 100 individual drives onto the LaCie 8big. Another workflow benefit has been the Thunderbolt functionality, which provides a dramatic speed increase from USB 2.0 that not only speeds up backups and data transfers, but will also save a significant amount of time and money for the company over the life of the drive.

Like the waves at the beach near their home town, Gnarly Bay started tiny. But with their forward-thinking use of technology and passionate storytelling—and with help from LaCie storage solutions—they’ve created their own big break. Expect success for this exciting company to continue to swell.

4K productions have presented a number of unique challenges for Gnarly Bay, and in a future blog post, we’ll be talking with them about their advice for preparing and handling 4K content.