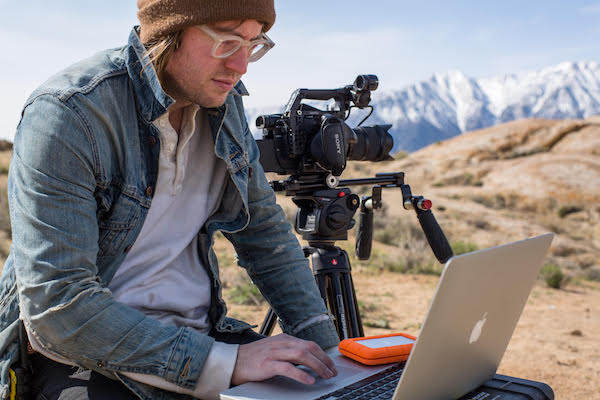 Pro filmmaker Chris Hershman has been with us this week at NAB for our Speaker Series, talking about his approach for filming music videos, from concept through post edit.

If you’re in a relationship with your camera, as in, you want to be with it all day everyday, then you’ve inevitably been dubbed the documentarian in your circle of family and friends. And this has probably led you to Google “how to make a career out of photography.” Chris Hershman, a Chicago-based filmmaker, photographer, and musician, made such a thing happen. Having shot for bands like Alabama Shakes, Switchfoot, and The War on Peace, his work has been featured on Rollingstone.com and at the 2012 Grammy Awards. For a guy who’s still in his 20’s, that’s quite a resume — and you might even say his success is strongly linked to a certain je ne sais quoi that comes from being an artist with a cowboy’s ambition. So, how do you break the nine-to-five cycle and run off with your camera for good? Here, Chris shares some insight on what got him there.

1. Hone in on your passion.

As a filmmaker, I think it’s natural to start filming your interests. I grew up playing instruments, so when I finally picked up a camera it just made sense to start photographing and filming other musicians. It was a great way to learn video — just let the performer perform and you worry about making a film. The music itself is naturally interesting and engaging. There’s a language I feel like musicians speak, that makes it easy for them to relate to me. They know I live in their world, and this grows a level of trust and comfort.

My first video was for Alabama Shakes, and I was very new to filming, so I didn’t know what I was doing. But my desire was to make sure the world knew how great they were. It was by no means a fancy video, but I think it ended up being a really good thing that it was rough around the edges. It matched her voice and their overall style as performers. If I would have avoided that opportunity because I wasn’t ready skill wise, or because I didn’t have tons of equipment, I would have missed a huge turning point in my career. Taking that risk paid off. Sometimes I feel like a bit of a cowboy — I live without limitations and just go for it.

When I step back, I guess I consider myself to be someone who fought to be here. From early on, I’ve pursued film and photography primarily as the source of my happiness, not my income. I’d rather crash and burn trying to do something I love rather than choose something safer that will cost me my happiness. There’s power in chaos, and this life is definitely chaos, it’s struggle. But the point is, when you’re fighting, you’re trying to win. So when you don’t have anything to fight for, there’s nothing to feel victorious over. I live in a world where I’m constantly fighting, winning, and failing. That’s the place you’ve got to navigate to, and I say navigate because everyone’s situation is different. You have to find your fight. And when it gets tough, that’s when you elevate. It hurts to grow up, it’s painful. But there’s a lot of people who don’t take risks because they don’t want to be in pain.

Beginners, a lot of times they’ll buy the cheapest solution and then they ask me why it takes them so long to edit their projects. So, this is the payoff of scaling up — not having to deal with that headache. Don’t feel like you need to be a tech genius to use this stuff, just be creative. The project I filmed last fall involved shooting back-to-back commercials for a campaign. I didn’t want to hand the client a pile of Rugged drives with all the raw footage, so I used the LaCie 6big. Having all that footage in one place created a smoother workflow for them and myself. Plus, I’ve felt the misery of losing data from only using one drive, so scaling up to a RAID solution makes sense when you’ve got a lot of footage and money on the line.

I spend a lot of time on the road, and recently I spent a year living out in California to grow a second client base. I would say that’s my biggest struggle in this line of work — feeling that I don’t have an actual home or a permanent place in the world. Whenever I do come back to Chicago, that’s when I feel most grounded. When I’m home cooking a meal with my friends, that’s the most relief I get from the larger-life questions. That’s when I find my peace. There’s a level of authenticity that comes with this kind of work, and in my experience, the only time things move forward are when I’m staying grounded and true to myself.

Check out Chris’ latest work — this music video he directed for The War On Peace just dropped this week: