What A Wildfire Taught Switchfoot About Protecting Creative Data

What A Wildfire Taught Switchfoot About Protecting Creative Data

When a wildfire headed straight for alternative rock band Switchfoot’s studio near San Diego, the musicians realized they were in danger of losing their entire library of multi-track recordings, representing years and years of hard work.

“The first thought in my head was: grab the hard drives,” the band’s lead vocalist Jon Foreman remembers.

The fire was a wake-up call. As a result, Switchfoot decided they needed to rethink the way they capture, manage and protect the most important thing in the studio: their music — and all the time, sweat, creative inspirations, writing and revising, skilled performances, collaboration and production that goes into it. And they needed a plan.

Read on below and check out this video to hear the band talk about what happened:

Building their own studio changed the way the band worked

Switchfoot is a Grammy-winning, multi-platinum alternative rock band whose latest studio album Where The Light Shines Through — their tenth — features classic and soulful tones that reach back to an era of musical freedom and simplicity, revealing the influence of The Beatles, Led Zeppelin and The Band among others. Upon its release the band called the record “both fresh and well-worn, wise and yet innocent: like songs that an old man buried and a younger man dug them up.”

Amid the past 20 years of struggles and successes, the band agrees one of the best decisions they ever made was to build a personal, dedicated studio space — to have a headquarters, a creative room, and an environment conducive to inspiring them to make their best work.

“You know, looking back about 10 years ago, when we built this place, we really didn’t realize what we were doing,” says drummer Chad Butler. “But we were creating and investing in our future productivity and workflow. It’s been a very efficient place to come each day and to take our music seriously. We don’t take ourselves too seriously — but in this place, it makes work fun, it makes work efficient, and we’re so grateful for this place.”

“This is a place where, when we unlock the door our own gear’s still here from the last time we walked in,” he says. “It just makes for a really comfortable environment, a really efficient workspace.” 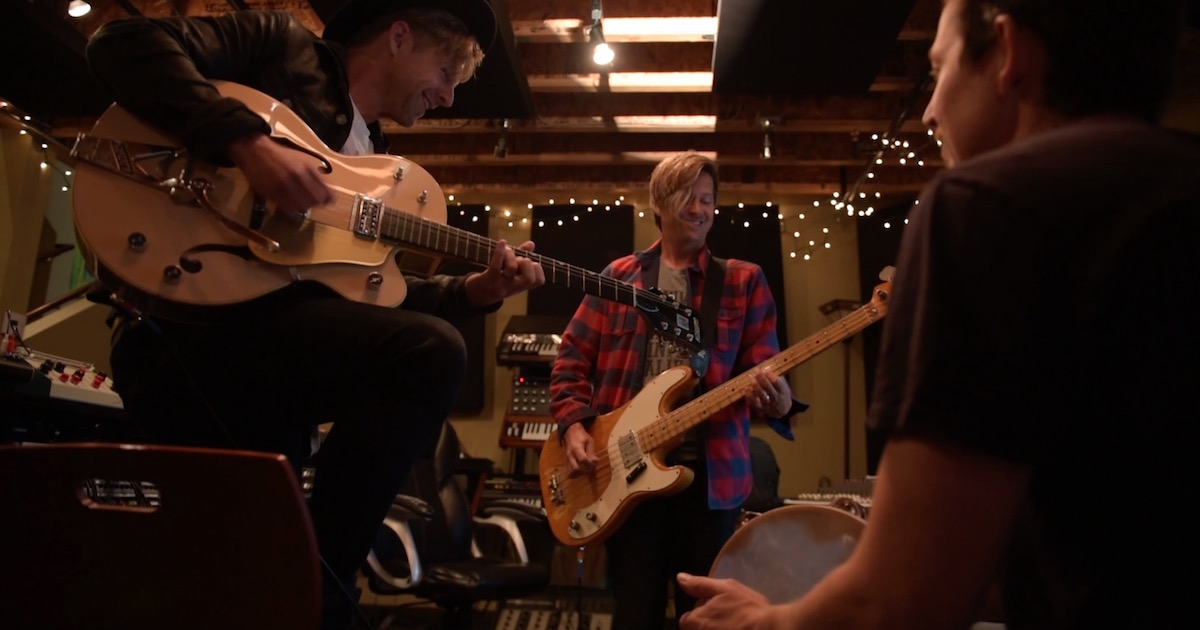 Like most modern recording studios, the band’s creative processes begin with the analog — human hands, acoustic drums and electric guitars, high-quality microphones, amps and compressors — then flow into a digital multi-tracking workstation. Ultimately their music resides on digital media which provides the production team with Switchfoot’s full palette of sounds and performances to be mixed and mastered and delivered to fans’ ears.

“In the studio you are constantly pouring yourself into the music,” says Jon Foreman, lead vocalist. “It’s a strange realization that, at the end of the year you’ve created a bunch of ones and zeros on the hard drive that represent your life, your struggle for meaning, your existence, your purpose — all of that.”

The band also creates and captures audio and video inspirations while on the road touring. Tanner Sparks, Switchfoot’s audio engineer and studio manager, gets to manage all that creative input.

“Part of my job when the guys come back from the road is to collect all of their drives,” says Tanner.

But they admit the process wasn’t necessarily as efficient as it could have been.

“I mean we’re artists — we’re not the most organized people,” says Chad. “And when we come home from tour, each of us would have a hard drive in our backpack of audio, video, things we collected on the road. And then we’d bring it back here to the studio, and just dump it in a plastic tub.”

Tim Foreman, the band’s bassist and Jon’s brother, agrees. “No one prepares for data management until they have to, you know?” 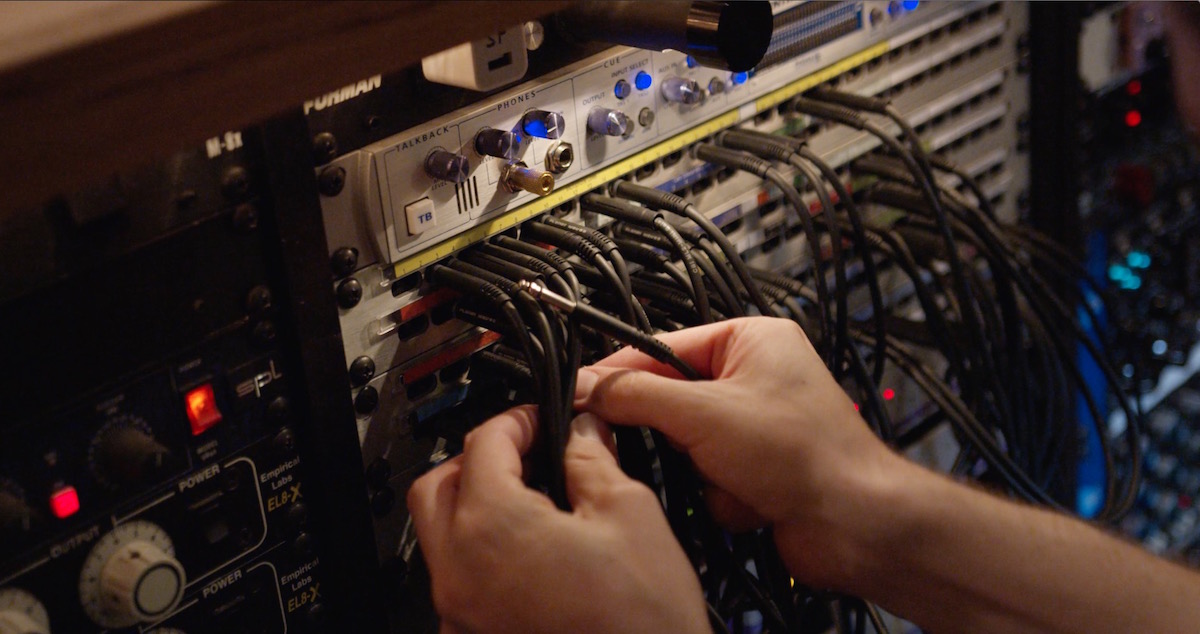 When the fire broke out

“I remember the day the fire broke out,” says Jon. “I was out of town and I was watching the news.”

The San Diego area is a beautiful place to live and work. And from time to time, in the dry season, it has wildfires.

“Forest fires — we get them every now and then,” says Jon. “This one year we had fires popping up everywhere. The firefighters are racing from here to there. You’re watching on social media as fires are just spreading, and the wind is crazy.”

“And we realize that the fire is headed straight for our studio. And my friend who lives right back here, he just he tells us he’s evacuating, and says, ‘The fire’s coming your way. You better get anything that you need out of your studio or else it’s going to be gone.’”

“The first thought in my head was: grab the hard drives,” Jon says.

Switchfoot guitarist Drew Shirley remembers. “I get a call from Jon and he says, ‘Drew, grab your five favorite guitars, and all the hard drives.’”

“Everything else in the studio we could replace,” Drew explains. “We could replace a lot of these instruments, and amps, and keyboards and stuff. But we could not replace the data, the songs, the things we’d worked on for the last few years. They were all at risk of being burned.”

Those are the things you can’t replace

“I literally filled up these huge tubs — like Tupperware tubs — with hard drives,” Drew says. “I mean they’re huge, and we had like a hundred of them.”

Did Drew get out with the hard drives in time?

“The happy ending of the story is the studio did not burn down,” says Tim. “We’re very thankful to all the firefighters who worked to make that happen. If you saw an aerial image right after the fire — it literally burned right up to the property on three sides. So — thank you to all the firefighters who risked their lives, to save our studio and all the other houses in the area.”

“The very next day, after we high-fived and hugged, we said: ‘OK let’s talk about data management, let’s talk about how to back this stuff up… so that the next time something like this happens, we’re not putting all of our life’s work at risk.’” 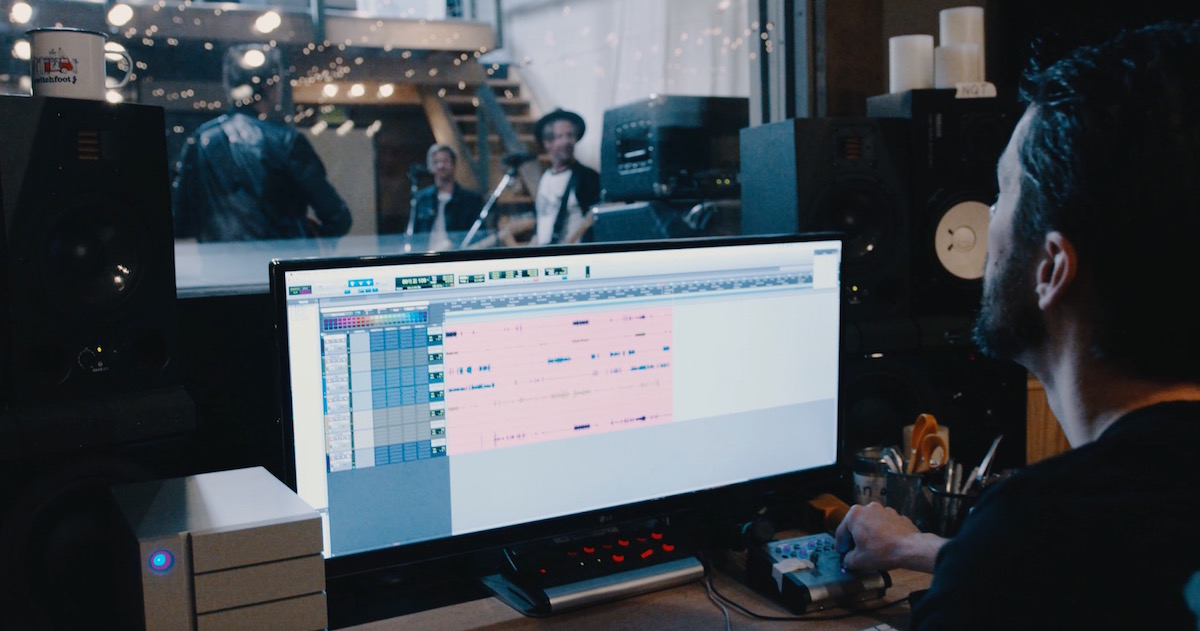 A new commitment to preserve their creative work

“It was a big wakeup call for us,” says Chad. “I mean, to have one building that’s a headquarters in the studio for the band … that’s a dream come true. But to be that naïve — to leave all of our work, all of our recordings, in one spot — was really dangerous. And that was eye-opening. We suddenly realized the gravity of the situation. We had to have a backup plan.”

“The organization was really bad, and we just realized, man we need to find a larger capacity solution — to take all these bits of information and put it in one place, and then to be able to make it redundant.”

They’ve done that by adding the LaCie 6big as a centralized storage system with RAID redundancy,and also keeping critical data backed up off site, in combination with their practice of capturing inspiration on LaCie Rugged drives in the field, Tanner explains.

“We do things differently now,” says Tanner. “For instance, if I need to recall a session from 10 years ago, or I need to get some random file, I don’t have to go through all of those tubs of hard drives. I can go to one hard drive.”

It’s time to be serious about what’s important, in our art and in our lives

“For us, it was this epiphany that we need to be more serious about what we do with the art that we create,” says Jon. “Out of that fire, we wrote the song “If the House Burns Down Tonight.”

“Yes, not only was it a scary thing, when you look at losing a lifetime’s worth of recordings, and guitars that are really special to us — but we also ended up being evacuated from our homes,” Tim agrees, sharing a revelation people don’t always grasp until facing a disaster.

“For me personally, as the first time that I’d ever had to pack up and evacuate — it’s a really crazy feeling when you start thinking about what you would take with you,” continues Tim.

“And it’s kind of a purifying moment when you realize: ‘Well as long as I’ve got my wife and my kids, I guess I’m good. At the end of the day, that’s all that I really care about. You know, it’s just stuff — it can burn. And so we wrote a song about that, ‘If the House Burns Down Tonight.'”

New this year for Jon Foreman: a documentary film and a tour

This year, while the band is taking a post-touring break with their families, next up for lead singer Jon Foreman is a different kind of tour: a series of dates to screen his new documentary film, 25 in 24.

It’s a film about an even more unusual tour Jon staged last year — a full 24-hour day filled with gigs, and all the crazy traveling, people and passion he crammed into that day.

“We all have these mad, ridiculous dreams, and this is mine — to play 25 shows in 24 hours,” explained Jon. How did he pull it off? See the film trailer below, and learn more about his movie-and-concert tour at Jon’s website here.