Thomas Leidig: Putting Celebrities and Safe Storage in the Picture

Thomas Leidig: Putting Celebrities and Safe Storage in the Picture 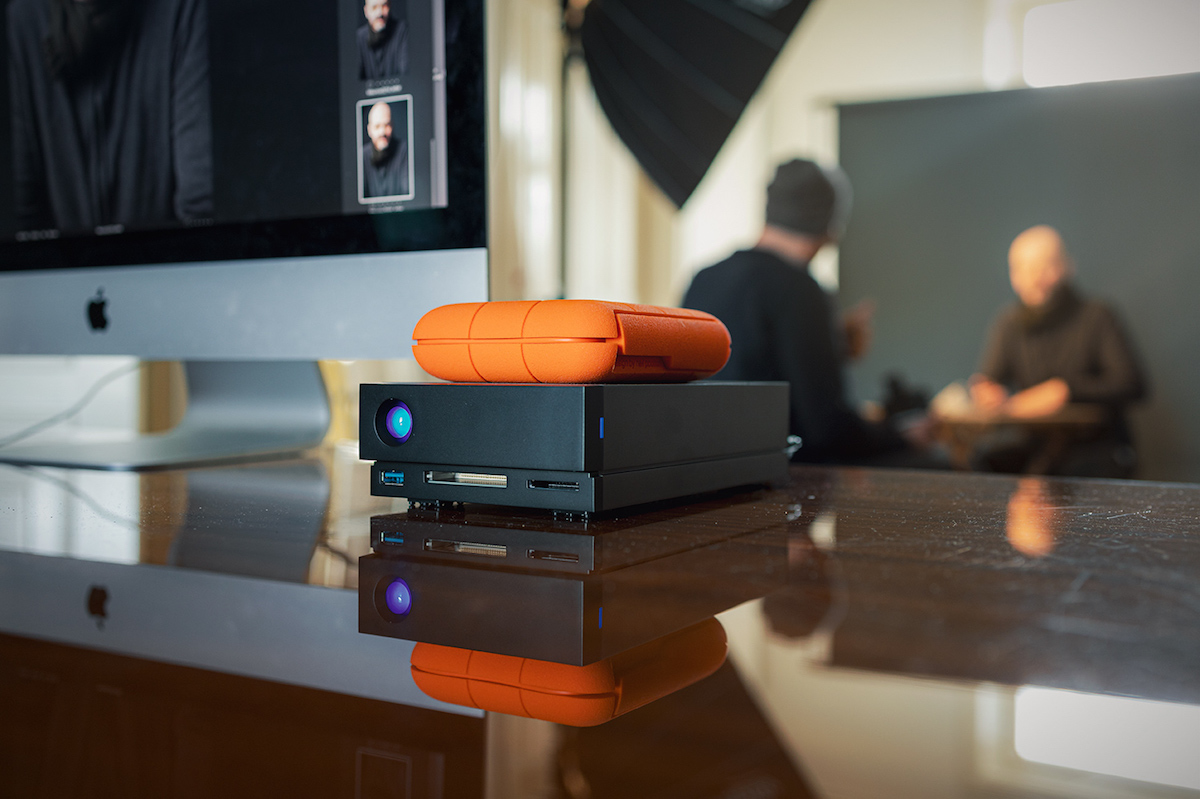 Cameron Diaz, Christoph Waltz, Jérôme Boateng, Halle Berry, Heidi Klum — these are just some of the top celebrities that the Hamburg-based photographer Thomas Leidig has had in front of his camera lens. In our interview, Thomas talks about how he came to be a celebrity photographer, the personal and technical challenges related to this, and why he has been placing his trust in LaCie storage media for years.

I knew early on that I wanted to do something that would allow me to express myself better than would have been possible with, for example, an apprenticeship at a bank or business administration studies. What really inspired me to become a photographer were, among other things, the impressive photo series of the celebrity photographer Gabo and the magazine Tempo. On completing a traditional photography apprenticeship, I initially worked for a video magazine, which at some point involved my photographing the staff. The magazine publishing company was evidently very happy with the results. More commissioned portraits soon followed. One thing then led to another and within a matter of weeks I had Til Schweiger in front of the camera lens as my first celebrity.

What is it that you love about your profession?

Meeting people and having close, personal contact with them. Aside from a handful of exceptions, I so far really have only photographed people who are crazy in a positive way. Each and every one of my photos has its own, very personal story. My profession has also opened doors to the world for me. These are privileges that I very much appreciate.

What is the secret to your success?

It goes without saying that you need a little luck. A degree of talent is beneficial too. But a major part is actually played by other factors entirely. You absolutely need someone who will back you, for example. And luckily, I had such a person! What’s more, I relatively quickly earned a reputation for having a way with celebrities, in particular with actors. I really did find interacting with them fairly easy right from the start, even though I never had any intentions of becoming a celebrity photographer. I am someone who treats people with great respect and with interest, while always maintaining a professional distance. I am also good at reading people’s moods, which helps me adapt to the photo shoots. Experience is very important too, of course. After a few “bloody noses,” you simply come to understand that most actors don’t especially like being photographed. And this helps immensely.

What, in your opinion, makes for a good portrait?

Even if we are doing a shoot in an unusual place or with crazy or artistic stagings, I always try to get a sense of the person and to show their actual, genuine character. If I succeed in this, good photos automatically follow. 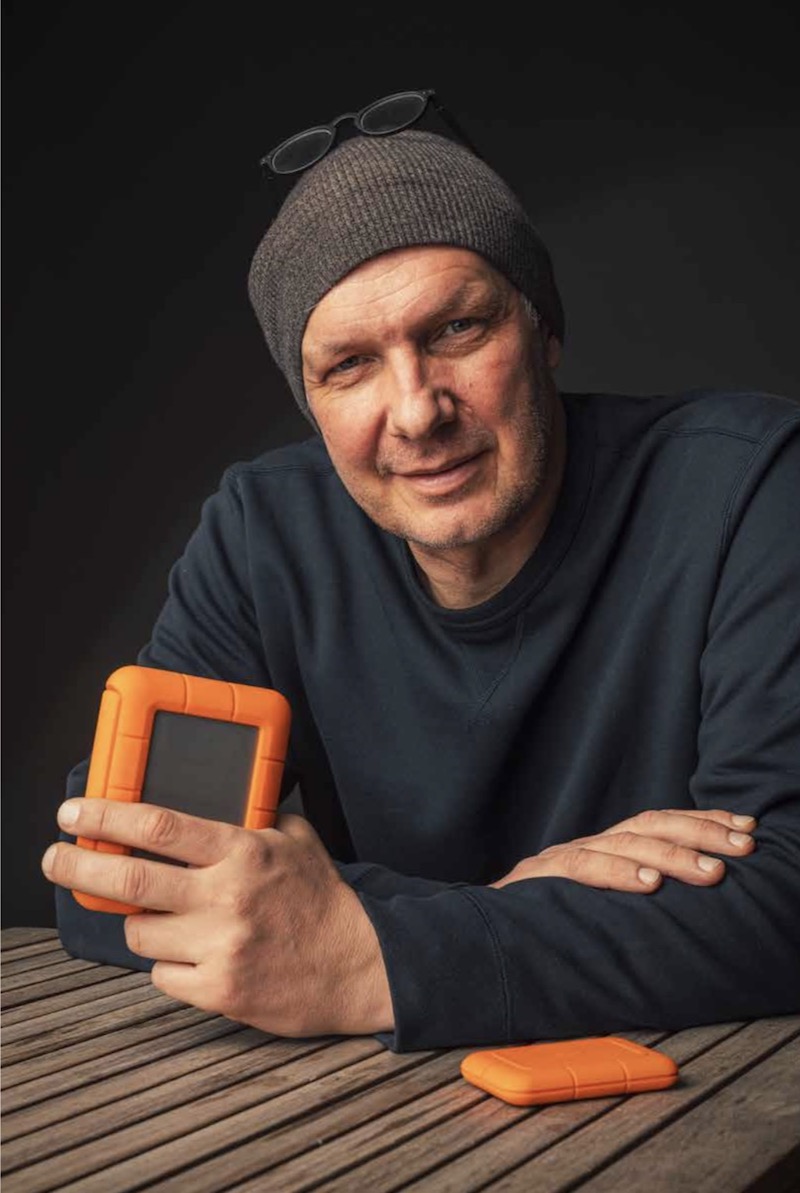 How important is the topic of data backups to you?

Incredibly important! My photos are my capital, without a doubt. As a professional photographer, backups are essential. I can’t do without a digital safety net. When I am travelling, I am often helped in this area by a digital assistant. When on the road, we always work with an iWorkCase if possible, featuring a laptop and two backup storage media. In the studio, the pictures go straight to my desktop computer and the backup drives connected to it as soon as I take them.

You place your trust in LaCie storage media. Why?

When I switched to digital photography some 20 years ago, I immediately started using a LaCie backup hard drive. And I have remained loyal to the brand ever since. There are various reasons for this, the most important of these being the issue of reliability. What can I say? In all these years, I have never lost a single picture, even though I now have a whole array of different models. And presenting my client with a small Rugged SSD in the typical LaCie orange design following a photo shoot is simply great, as both the look and the feel tend to be a hit with them.

Which models are you currently using?

In addition to Rugged SSDs, which are my preferred choice when out and about because of their speed, mobility and robustness, I use the Rugged Boss SSD in my LaCie set-up for on-set workflows. The latter is ideal when we don’t have a laptop, for example. The technology allows us to transfer pictures directly from the memory cards or via a USB port to the SSD. The built-in status monitor tells you about the transfer progress, the remaining storage capacity and the battery status.

In the studio, I use the LaCie 1big Dock as it offers all sorts of advantages such as memory card slots and a USB port. And thanks to DisplayPort connection, I can even connect a second 4K monitor to my computer via the 1big Dock. Capacities of up to 18TB are likewise very convenient. As an option, the storage units can even be replaced. In other words, it’s an entirely carefree workstation for the photography studio.

Do you shop around and look at other manufacturers too?

To be honest, no. Why would I? It goes without saying that, technologically speaking, everything will increasingly be about high-performance products that can process increasingly large data volumes ever more quickly, and this applies to me too. But LaCie has long since taken steps to keep pace with this. Its product portfolio always features just the right model for every requirement profile. And I can’t imagine this changing any time soon.